For a better understanding of Denial-of-Service Attack & Distributed Denial of Service (DoS/DDoS) attacks, one must be familiar with their concepts beforehand. This module discusses what a DoS attack is, what a DDoS attack is, and how the DDoS attacks work. 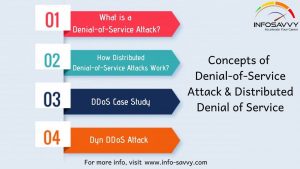 What is a Denial-of-Service Attack?

DoS is an attack on a computer or network that reduces, restricts, or prevents accessibility of system resources to its legitimate users. In a DOS attack, attackers flood a victim’s system with non-legitimate service requests or traffic to overload its resources, bringing the system down, leading to unavailability of the victim’s website or at least significantly slowing the victim’s system or network performance. The goal of a DoS attack is not to gain unauthorized access to a system or to corrupt data; it is to keep legitimate users away from using the system.

Following are the examples of types of DoS attacks:

DoS attacks come in a variety of forms and target a variety of services. The attacks may cause the following: 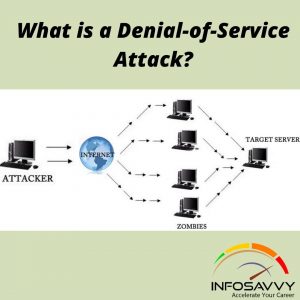 Imagine a pizza delivery company, which does much of its business over the phone. If an attacker wanted to disrupt this business, he could figure out a way to tie up the company’s phone lines, making it impossible for the company to do business. That is how a DoS attack works—the attacker uses up all the ways to connect to the system, making legitimate business impossible, DoS attacks are a kind of security break that does not generally result in the theft of information. However, these attacks can harm the target in terms of time and resources. However, failure might mean the loss of a service such as email. In a worst-case scenario, a DOS attack can mean the accidental destruction of the files and programs of millions of people who happen to be surfing the Web at the time of attack.

A Distributed Denial of Service DDoS attack is a large-scale, coordinated attack on the availability of services on a victim’s system or network resources, launched indirectly through many compromised computers (botnets) on the Internet.

As defined by the World Wide Web Security FAQ “A distributed denial-of-service (DDoS) attack uses many computers to launch a coordinated DoS attack against one or more targets. Using client/server technology, the perpetrator is able to multiply the effectiveness of the denial of service significantly by harnessing the resources of multiple unwitting accomplice computers, which serve as attack platforms,” The flood of incoming messages to the target system essentially forces it to shut down, thereby denying service to the legitimate users.

The services under attack are those of the “primary victim,” whereas the compromised systems used to launch the attack are the “secondary victims.” The use of secondary victims in performing a DDoS attack provides the attacker with the ability to wage a larger and more disruptive attack while making it more difficult to track down the original attacker.

The primary objective of any DDoS attacker is to first gain administrative access on as many systems as possible. In general, attackers use customized attack script to identify potentially vulnerable systems. Once the attacker gains access to the target systems, he or she will upload DDoS software and run it on these systems but not until the time chosen to launch the attack.

DDoS attacks have become popular because of the easy accessibility of exploit plans and the negligible amount of brain work required while executing them. These attacks can be very dangerous because they can quickly consume the largest hosts on the Internet, rendering them useless. The impact of DDoS includes loss of goodwill, disabled network, financial loss, and disabled organizations.

In a Distributed Denial of Service DDoS attack, many applications found the target browser or network with fake exterior requests that make the system, network, browser, or site slow, useless, and disabled or unavailable. 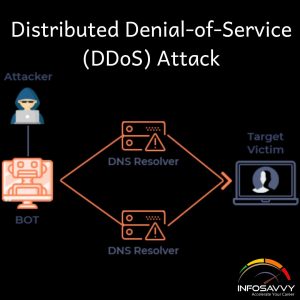 Denial-of-Service (DOS) and Distributed Denial-of-Service (DDoS) attacks became a serious threat to computer networks. These attacks attempt to make a machine or network resource unavailable to its authorized users. Usually, DoS/DDoS attacks exploit vulnerabilities within the implementation of TCP/IP model protocol or bugs in a specific OS.

Also Read:- Types of attacks on a system

At the end of this module, you’ll be ready to perform the following:

Learn more about identity theft in CEH from Infosavvy.

“The first step toward change is awareness. The second step is acceptance”

DDoS may be a sophisticated and sophisticated attack supported DoS attack and multiple distributed attack sources in a DDoS attack, a large number of compromised computers (zombies) are involved to interrupt or suspend network services. This section deals with a DDoS case study.

In a DDoS attack, attackers use a group of compromised systems (bats or zombies) usually infected with Trojans to perform a DoS attack on a target system or network resource.

Users, who desire to perform the DDoS attack, may download the HOIC DDoS attack tool by clicking on the malicious link provided by the hacker. These users are termed “volunteers.” All the volunteers connect via IRC channel to the anonymous hacker and await their instructions to proceed further. The hacker instructs the volunteers to flood the target web server (e.g., PayPal, MasterCard, and PAYBACK) with multiple requests. On receiving their instructions, the volunteers take action accordingly, which results within the target server being overwhelmed. Thus, it’ll not respond to requests from even legitimate users.

Hackers advertise botnets on various blogs, search engines, social networking sites, emails, and so on providing download links for them. Hackers also use fake updates and security alerts to trick the victim to download the malware. The intension in doing so is to spread the botnet and increase the size of the attack network. This method of attack is extremely quick and effective.

Use of Mobile Devices as Botnets for Launching DDoS Attacks

Android devices are passively vulnerable to various malware like Trojans, buts, RATs, and so on, which are often found in third-party application stores. These unsecured android devices are becoming the primary targets for the attackers in order to enlarge their botnet network since they’re highly vulnerable to malware. Malicious android applications found in Google Play Store and drive-by download are just a few examples of methods of infection. The attacker binds the malicious APK server to the android application package (APK file), encrypts it, and removes unwanted features and permissions before distributing the malicious package to a third-party app store like Google Play Store. Once the victims are tricked to download and install such applications, the victim’s device will be taken over by the attacker, enslaving the targeted device into the attacker’s mobile botnet to perform malicious activities like launch DDoS attacks, web injections, and so on.

Dyn is an Internet Performance Management (IPM) company, which is believed to be a pioneer domain name system service provider. They also offer internet infrastructure services and products like monitoring and analytics, control, online infrastructure optimization, and email.

The Dyn attack, which happened on 21 October 2016, is one among the largest data breaches in history. This attack overturned a large portion of the internet within the United States and Europe and affected plenty of services. The source of the attack was the Mirai botnet. This botnet is unlike other botnets, consisting of loT devices like IF cameras, printers, and digital video recorders. The objective of a DoS attack is to deny or disrupt authorized users from accessing a resource or service.

According to Dyn, Mirai botnets have contributed to a serious volume of attack traffic. Mirai may be a piece of malware, which infects and exploits the vulnerable network devices on the internet, preferably loT devices. Upon successful infection, the bat gets registered to a C&C which controls the botnet during attacks, Mirai malware exploits those network devices that authenticate using default credentials.

The first attack was staged between approximately 11:10 UTC to 13:20 UTC. Initially, a huge inclination within the bandwidth consumption was witnessed at various locations of Dyn DNS infrastructure, which imitated a situation like that of a DDoS attack. The attack began to focus on the US-East region. This large volume of data originated from various source IP addresses and was destined for destination port 53, where the data packets were composed of TCP and UDP packets.

The next attack was performed between 15:50 UTC and 17:00 UTC. Unlike the previous attempt, this attack was targeting most the available Managed Infrastructures of Dyn around the globe. Though the second attempt consisted of same set of attack vectors and protocols used during the first attack, it still managed to disrupt the functionalities of the service provider despite the deployed incident response mechanism.

This DDoS attack affected the anycast servers of Dyn. It also prevented the services for resolving legitimate DNS queries. It is estimated to have generated more than 40 to 50 times the normal traffic volume, and the expected number of involved botnets during the attack amounts to 100,000. According to a few reports, the total volume of data involved during this attack is estimated to be 1.2 Tbps. A few major US websites including PayPal, Spotify, Twitter, and Amazon faced connectivity issues. The various other web services of companies such as BankWest, HSBC, and Ticketmaster were also affected. According to BitSight, approximately 8% of the Dyn DNS customer base terminated their contract after the attack.