Hard Disk Interfaces in this the hard disk drive connects to the PC using an interface. There are various types of interfaces: IDE, SATA, Fiber Channel, SCSI, etc.

IDE (Integrated Drive Electronics) is a standard electronic interface used between a computer motherboard’s data paths or bus and the computer’s disk storage devices, such as hard drives and CD-ROM/DVD drives. The IBM PC Industry Standard Architecture (ISA) 16-bit bus standard is base for the IDE interface, which offers connectivity in computers that use other bus standards. ATA (Advanced Technology Attachment) is the official American National Standards Institute’s (ANSI) name of Integrated Drive Electronics (IDE).

PATA, based on parallel signaling technology, offers a controller on the disk drive itself and thereby eliminates the need for a separate adaptor card. Parallel ATA standards only allow cable lengths up to 46 centimeters (18 inches).

Most computers sold today use an enhanced version of IDE called Enhanced Integrated Drive Electronics (EIDE). IDE drives connect with PCs, using an IDE host adapter card. The IDE controller in modern computers is a built-in feature on the motherboard itself. Enhanced IDE is an extension to the IDE interface that supports the ATA-2 and ATAPI standards.

Two types of Enhanced IDE sockets are present on the motherboard. A socket connects two drives, namely, 80 wire cables for fast hard drives and a 40-pin ribbon cable for CD-ROMs/DVD­RUMs.

Enhanced or Expanded IDE is a standard electronic interface, connecting a computer’s motherboard to its storage drives. EIDE can address a hard disk bigger than 528 Mbytes and allows quick access to the hard drive as well as provides support for Direct Memory Access (DMA) and additional drives like tape devices, CD-ROM, etc. While updating the computer system with bigger hard drive, insert the EIDE controller in the system card slot.

Serial ATA (SATA) offers a point-to-point channel between the motherboard and drive. The cables in SATA are shorter in length as compared to PATA. It uses four-wire shielded cable that can be maximum one meter in length. SATA cables are more flexible, thinner, and less massive than the ribbon cables, required for conventional PATA hard drives.

Drive and motherboard connectivity through a SATA point-to-point channel is based on serial signaling technology. This technology enables data transfer of about 1.5 Gbps in a half-duplex channel mode.

SCSI is a set of ANSI standard electronic interfaces that allow personal computers to communicate with peripheral hardware such as disk drives, tape drives, CD-ROM drives, printers, and scanners. Developed by Apple Computer and still used in the Macintosh, the present sets of SCSls are parallel interfaces. SCSI ports continue to come as built-in feature in various personal computers today and gather supports from all major operating systems.

In addition to faster data rates, SCSI is more flexible than earlier parallel data transfer interfaces. SCSI allows up to 7 or 15 devices (depending on the bus width) to be connected to a single SCSI port in daisy-chain fashion. This allows one circuit board or card to accommodate all the peripherals, rather than having a separate card for each device, making it an ideal interface for use with portable and notebook computers. A single host adapter, in the form of a PC card, can serve as a SCSI interface for a laptop, freeing up the parallel and serial ports for use with an external modem and printer while allowing usage of other devices in addition. 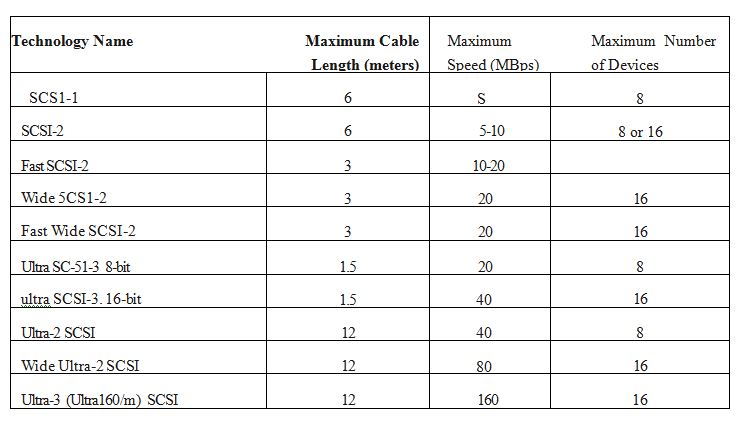 SCSI allows one circuit board or card to accommodate all the peripherals, rather than having a separate card for each device.

Serial Attached SCSI (SAS) is a point-to-point serial protocol that handles data flow among the computer storage devices such as hard drives and tape drives. It is the successor to Parallel SCSI and uses the standard SCSI command set. SAS is chosen over SCSI because of its flexibility and other beneficial features as given below:

USB is a “plug-and-play” interface, which allows users to add a device without an adapter card and without rebooting the computer. Universal Serial Bus (USB), developed by Intel, was first released in 1995 with a maximum speed support of 12 Mbps. Currently available USB supports data transfer speeds up to 5 Gbps. USB allows external peripheral devices such as disks, modems, printers, digitizers, and data gloves to connect to the computer.

The USB design architecture is asymmetrical that comprise a host, many USB ports, and many peripheral devices. Communication through USB device is mainly through pipes or logical channels, which are connections between the host controller and a logical entity called endpoint. USB cable length ranges from about 3 feet to over 16 feet.  The maximum length being 16 feet 5 inches for high speed devices and 9 feet 10 inches for low speed devices.