Today social networking sites are widely used by many people that allow them to build online profiles, share information, pictures, blog entries, music clips, and so on. Thus, it is relatively easier for an attacker to impersonate someone, The victim is likely to trust them and eventually reveal information that would help the attacker gain access to a system.

This section describes how to perform social engineering through impersonation using various social networking sites such as Facebook, LinkedIn, and Twitter, and highlights risks these sites pose to corporate networks.

Social networking sites are a treasure trove for attackers because people share their personal and professional information on these sites, such as name, address, mobile number, date of birth, project details, job designation, company name, location, etc. The more information people share on a social networking site, the more likely an attacker would impersonate them to launch attacks against them, their associates, or organization. They may also try to join the target organization’s employee groups to extract corporate data.

In general, the information attackers gather from social networking sites include organization details, professional details, contacts and connections, and personal details and use the information to execute other forms of social engineering attacks.

Facebook is a well-known social networking site or service that connects people to other people. It is widely used to communicate with friends, and share and upload photos, links, and videos. To impersonate users on Facebook, attackers use nicknames instead of their real names. They create fake accounts and try to add “Friends” to view others’ profiles to obtain critical and valuable information. The steps an attacker takes to lure a victim into revealing sensitive information:

Attackers create a fake account and scan details on profile pages of various targets on social networking sites such as LinkedIn and Twitter to engage in spear phishing, impersonation, and identity theft.

Also Read : How will Social Engineering be in the Future

Before sharing data on a social networking site or enhancing their channels, groups, or profiles, private and corporate users should be aware of the following social or technical security risks they could face.

Insider attacks are generally performed by:

“Don’t use social media to impress people; use it to impact people.” 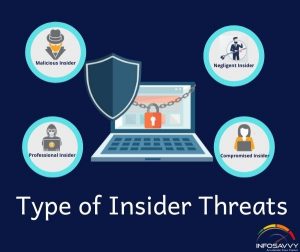 There are four types of insider threats. They are:

Why is Insider Attack Effective?

An insider attack is effective because of the following reasons:

Example of Insider Attack: Disgruntled Employee Most cases of insider abuse can be traced to individuals who are introvert, incapable of managing stress, experiencing conflict with management, frustrated with their job or office politics, lacking in respect or promotion, transferred, demoted, issued an employment termination notice, among other reasons. Disgruntled employees may pass company secrets and intellectual property to competitors for monetary gain, thus harming the organization.

Disgruntled employees can use Steganography programs to hide company secrets and later send the information as an innocuous-looking message such as a picture, image, or sound file to competitors, using a work email account. Thus, no one suspects him/her because the attacker hides the sensitive information in the picture or image.