Overview of an Amazon Virtual Private Cloud Virtual service provides the networking layer of EC2. A VPC is a virtual network that can contain EC2 instances as well as network resources for other AWS services. By default, every VPC is isolated from all other networks.

You can, however, connect your VPC to other networks, including the Internet and other VPCs. In addition to EC2, VPCs are foundational to many AWS services, so understanding how they work is fundamental to your success on the exam and as an AWS architect. Don’t assume you can ignore VPCs just because you’re not using EC2. A VPC can exist only within an AWS region. When you create a VPC in a region, it won’t show up in any other regions. You can have multiple VPCs in your account and create multiple VPCs in a single region. To keep things simple, I’ll start by assuming only one VPC in one region. Later, I’ll cover considerations for multiple VPCs. If you’re familiar with the components of a traditional network, you’ll find many VPC components to be familiar. But although VPCs function like a traditional TCP/IP network, they are scalable, allowing you to expand and extend your network without having to add physical hardware. To make this scalability possible, some components that you’d find in a traditional network—such as routers, switches, and VLANs—don’t exist in VPCs. Instead, they’re abstracted into software functions and called by different names.

Like a traditional network, a VPC consists of at least one range of contiguous IP addresses. This address range is represented as a Classless inter domain routing (CIDR) block. The CIDR block determines which IP addresses may be assigned to instances and other resources within the VPC. You must assign a primary CIDR block when creating a VPC. There are different ways to represent a range of IP addresses. The shortest way is by CIDR notation, sometimes called slash notation. For example, the CIDR 172.16.0.0/16 includes all addresses from 172.16.0.0 to 172.16.255.255—a total of 65,536 addresses! You may also hear the CIDR block referred to as an IP prefix. The /16 portion of the CIDR is the prefix length. The prefix length of a VPC CIDR can range from /16 to /28. There’s an inverse relationship between the prefix length and the number of IP addresses in the CIDR. The smaller the prefix length, the greater the number of IP addresses in the CIDR. A /28 prefix length gives you only 16 addresses. The acronym IP refers to Internet Protocol version 4 or IPv4. Valid IPv4 prefix lengths range from /0 to /32. Although you can specify any valid IP range for your VPC CIDR, it’s best to use one in the RFC 1918 range to avoid conflicts with public Internet addresses.

If you plan on connecting your VPC to another network—whether an on-premises network or another VPC—be sure the VPC CIDR you choose doesn’t overlap with addresses already in use on the other network. You can’t change the primary CIDR block, so think carefully about your address requirements before creating a VPC.

You may let AWS assign an IPv6 CIDR to your VPC. Unlike the primary CIDR, which is an IP prefix of your choice, you can’t choose your own IPv6 CIDR. Instead, AWS assigns one to your VPC at your request. The IPv6 CIDR will be a publicly routable prefix from the global unicast IPv6 address space. For example, AWS may assign you the CIDR 2600:1f18:2551:8900/56. Note that the prefix length of an IPv6 VPC CIDR is always /56. Complete Exercise 4.1 to create your own VPC.

A subnet is a logical container within a VPC that holds your EC2 instances. A subnet lets you isolate instances from each other, control how traffic flows to and from your instances, and lets you organize them by function. For example, you can create one subnet for public web servers that need to be accessible from the Internet and create another subnet for database servers that only the web instances can access. In concept, subnets are similar to virtual LANs (VLANs) in a traditional network. Every instance must exist within a subnet. You’ll often hear the phrase “launch an instance into a subnet.” Once you create an instance in a subnet, you can’t move it. You can, however, terminate it and create a different instance in another subnet. By extension, this also means you can’t move an instance from one VPC to another.

The restrictions on prefix lengths for a subnet CIDR are the same as VPC CIDRs. Subnet CIDR blocks in a single VPC can’t overlap with each other. Also, once you assign a CIDR to a subnet, you can’t change it. It’s possible for a subnet and VPC to share the same CIDR. This is uncommon and won’t leave you room for additional subnets. More commonly, each subnet’s prefix length will be longer than the VPC’s to allow for multiple subnets to exist in the same VPC. A subnet can’t have multiple CIDRs. Unlike a VPC that can have secondary CIDRs, a subnet can have only one. However, if a VPC has a primary CIDR and a secondary CIDR, your subnet’s CIDR can be derived from either. For example, if your VPC has the primary CIDR of 172.16.0.0/16 and a secondary CIDR of 172.17.0.0/16, a subnet in that VPC could be 172.17.12.0/24, as it’s derived from the secondary VPC CIDR.

In this example, if the us-east-1a zone fails, the instance web1 will fail because it’s in that zone. But web2, which is in the us-east-1b zone, will remain available. Having subnets in different availability zones is not a requirement. You can place all of your subnets in the same zone, but keep in mind that if that zone fails, all instances in those subnets will fail as well. Refer to Figure 4.1 for an example of two instances in different availability zones. 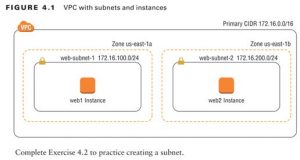