Robin, a professional hacker, targeted an organization’s network to sniff all the traffic. During this process, Robin plugged in a rough switch to an unused port in the LAN with a priority lower than any other switch in the network so that he could make it a root bridge that will later allow him to sniff all the traffic in the network. What is the attack performed by Robin in above scenario?

ARP spoofing is a type of attack in which a malicious actor sends falsified ARP (Address Resolution Protocol) messages over a local area network. This results in the linking of an attacker’s MAC address with the IP address of a legitimate computer or server on the network. Once the attacker’s MAC address is connected to an authentic IP address, the attacker will begin receiving any data that is intended for that IP address. ARP spoofing can enable malicious parties to intercept, modify or even stop data in-transit. ARP spoofing attacks can only occur on local area networks that utilize the Address Resolution Protocol.

VLAN Hopping is an attack where the attacker is able to send traffic from one VLAN into another. There are two different methods to accomplish this:

Here’s an illustration for the double tag method: 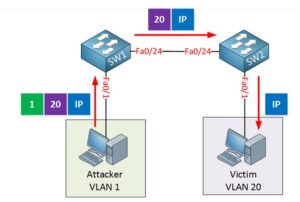 In the picture above we have two switches, SW1 and SW2. The attacker is in VLAN 1 and our victim is in VLAN 20. Here are the configurations of the switches:

As you can see above the interfaces that connect to the computers are in access mode, the attacker is in VLAN 1 while our victim is in VLAN 20. The interface between the two switches is a 802.1Q trunk.

Does the double tagging method actually work? The idea is that the switch will just accept any frames even if it’s in access mode. I tried this on a Cisco Catalyst Switch 3560 running the IP services 12.2(55)SE10 image.

To test this, I used scapy on a computer running Kali:

Here’s what you see above:

Here’s a capture of this packet in wireshark:

Domain Name Server (DNS) spoofing (a.k.a. DNS cache poisoning) is an attack in which altered DNS records are used to redirect online traffic to a fraudulent website that resembles its intended destination.

Once there, users are prompted to login into (what they believe to be) their account, giving the perpetrator the opportunity to steal their access credentials and other types of sensitive information. Furthermore, the malicious website is often used to install worms or viruses on a user’s computer, giving the perpetrator long-term access to it and the data it stores.

Methods for executing a DNS spoofing attack include: 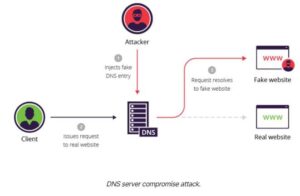 Such a scenario would proceed as follows:

STP prevents bridging loops in a redundant switched network environment. By avoiding loops, you can ensure that broadcast traffic does not become a traffic storm.

STP is a hierarchical tree-like topology with a “root” switch at the top. A switch is elected as root based on the lowest configured priority of any switch (0 through 65,535). When a switch boots up, it begins a process of identifying other switches and determining the root bridge. After a root bridge is elected, the topology is established from its perspective of the connectivity. The switches determine the path to the root bridge, and all redundant paths are blocked. STP sends configuration and topology change notifications and acknowledgments (TCN/TCA) using bridge protocol data units (BPDU).

An STP attack involves an attacker spoofing the root bridge in the topology. The attacker broadcasts out an STP configuration/topology change BPDU in an attempt to force an STP recalculation. The BPDU sent out announces that the attacker’s system has a lower bridge priority. The attacker can then see a variety of frames forwarded from other switches to it. STP recalculation may also cause a denial-of-service (DoS) condition on the network by causing an interruption of 30 to 45 seconds each time the root bridge changes. An attacker using STP network topology changes to force its host to be elected as the root bridge. 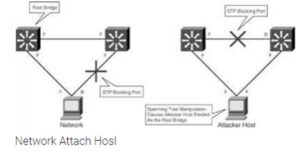